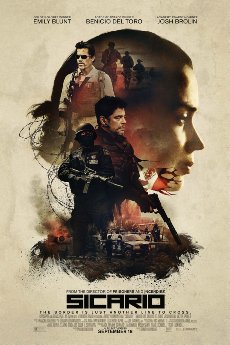 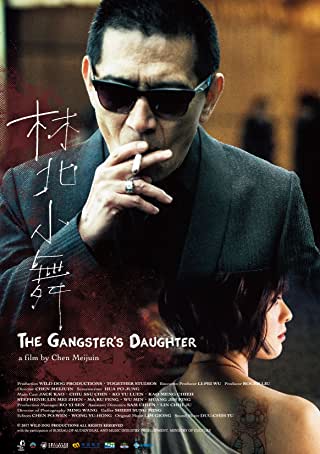 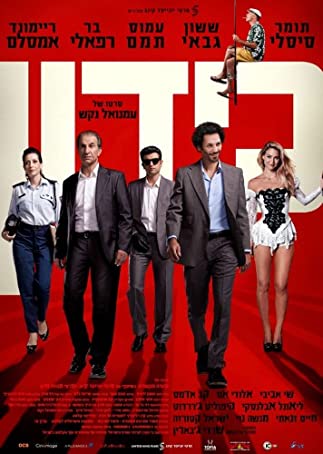 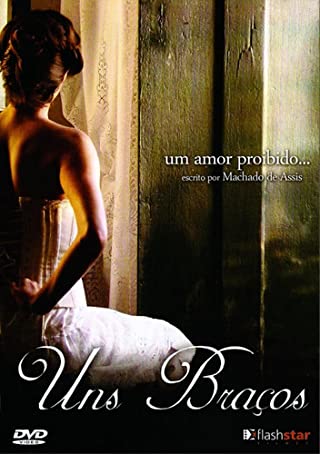 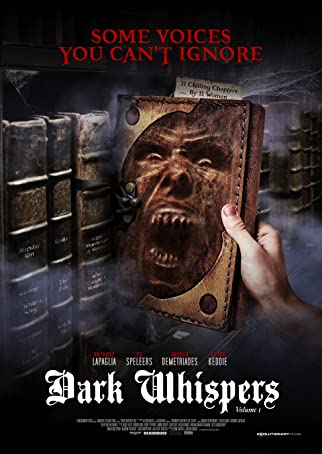 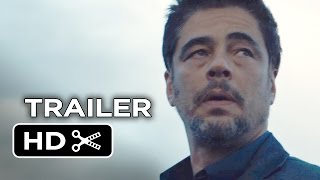 When drug violence worsens on the USA Mexico border, the FBI sends an idealistic agent, Kate Macer (Emily Blunt) on a mission to eradicate a drug cartel responsible for a bomb that had killed members of her team.

When drug violence worsens on the USA Mexico border, the FBI sends an idealistic agent, Kate Macer (Emily Blunt) on a mission to eradicate a drug cartel responsible for a bomb that had killed members of her team.

"Sicario" describes, with surgical precision, the fatal and bloody desecration of Mexico as a result of its decades long cartel war. And it does so by compressing this almost endless tragedy into a two-hour tour-de-force of filmmaking. At its center we find idealistic FBI-Agent Kate Macer (Emily Blunt), who is recruited to pursue a Mexican drug-baron. She is being guided by a seemingly untouchable covert assassin named Alejandro (Benicio Del Toro). Their investigation and methods are pushed further into unknown territory where justice and morality are no longer valid. The end not only justifies the means, it requires them.Denis Villeneuve's masterful piece exemplifies not only filmmaking of the highest order, but carves out a place alongside the terrible news reports as a deeply regretful, angry and at times almost unbearable look into the abyss of a socio-political nightmare that is fueled by first world-habit and global economics.Through the powerful performances by Blunt, Del Toro and Josh Brolin in the leads as well as the excellent supporting cast, do we get a sense of the human cost (physical and psychological), which the war on drugs has caused.From an exploding prison population, to the destruction of Mexican agriculture, to refugees and a cycle of violence that is beyond barbarity; the pull that "Sicario" exerts over the viewer is undeniable and by skirting the limits of bearable tension, without ever becoming exploitive, it is never giving an inch concerning its subject matter.Few movies this year will have such a clear and defined structure and unflinching approach towards a situation that appears to be beyond salvation, while showing at the same time that life nevertheless continues.Taylor Sheridan's script doesn't miss a single beat and without sidestepping anything frees itself from beaten movie conventions by using them in an extremely skillful manner.All these themes, stories and characters are captured through the lens of veteran Roger Deakins (Skyfall, No Country for Old Men) who lets us always know how the micro- and macro-particles of any conflict are inextricably intertwined. We share the vistas of beautiful sceneries while having to witness their downfall. Whatever ideals the likes of Emilio Zapata once had, their land has now, as it is described in the movie, become ?the country of wolves". Fifteen years ago Steven Soderbergh's ?Traffic" which earned numerous Oscars, not the least of which went to Benicio Del Toro, made a clear statement about the various strands the drug trafficking business touches. Now, all those years later we see in ?Sicario" that even the faintest of hopes that ?Traffic" held onto have been eviscerated. What now? One might ask.

visceral drug trade thriller pulls no punches in its grim depiction of the cross-border traffic between Mexico and the States.This time french-Canadian director Denis Villeneuve who gave the viewers a kidnap drama suspense hit international movie "prisoners". Now coming back to screen with a action crime flick.Emily Blunt takes the role of Kate Macer, an FBI field agent plunged in the powerful world of a drugs cartel as well as she trying to make her way to get a better rank for herself. She delineates perfectly the emotional conflicts of a woman working with violence and corruption on a daily basis.*picks from trailer* The opening sequence in which rows of rotting corpses are found in a home in Arizona belonging to the cartel sets the tone for the helter skelter ride to follow in which Villeneuve sustains the knife-edge tension without a blip.Nobody is who they seem to be, least of all Josh Brolin who suggests that he may be a defence contractor although Kate and her partner (Daniel Kaluuya) believes he may be from the CIA.Also emerging from the shadows is Benicio Del Toro as Alejandro, an enigmatic figure who is the sicario of the title - in other words a hit-man whom you never where he is going to turn up next or on whose side he will be.Although the violence is wince-inducing it is never gratuitous in the context of this particular world, where human beings are completely dispensable.it's basically a great action thriller movie. A must see

One of this year's best thrillers

More visceral than Steven Soderbergh's "Traffic." SICARIO is about the cost to pay in a drug war and its merciless brutality. Masterfully shot, perfectly acted. This is a film that doesn't allow you to feel comfortable. With each passing moment, it crawls its way deeper and deeper into this world where death is its only end game.Director Denis Villenuve reteams with master cinematographer Roger Deakins to take advantage of the desert, the weather, the landscape, the terrain, and use them as silent supporting characters that also serve to express the characters' inner demons. Deakins is a multiple Oscar-nominated DP that gets better with every work and in SICARIO, you will see that he once again experiments with even richer and newer ways of shooting, whether it's the night vision first person view or the angles to capture the intensity at the border, moments before weapons are drawn, it's like enrolling in another classroom taught by Deakins but with extra curriculums to learn. The man just knows how to leave his competition behind.To me, what I think is impressive about Emily Blunt is that she is beauty and strength all in one. She can express torment and conflicted soul so effortlessly, she plays this FBI agent, Kate Macer who does things by the book, she always holds herself and others accountable for every detail, so when she volunteers to be a part of a black ops that practically throws the book out the window, her idealistic views are put to the test. And I think Emily Blunt does a nice job of executing that. It's somewhat of a fish out of water story where Blunt's Kate Macer knows she's being used but she wants to know what she's being used for. Oscar winner, Benicio Del Toro has walked through this territory before in Steven Soderbergh's "Traffic" where he played a Tijuana police officer. In SICARIO, he plays a mysterious character, Alejandro, he's skilled, a man of a few words, soft spoken, but highly intense and has a sharp instinct. What has always been brilliant about Del Toro, in all of his works including SICARIO, is that he can say much without actually saying much at all. In the case of his character, Alejandro, there's a certain dark pain that's magnetic about him. It's all in the eyes. Oscar nominee Josh Brolin plays the leader of the team, Matt Graver, he talks way too damn much but that is also a part of his game, his game of manipulating others.I've never been to Juarez, I've heard horrible stories about that place, and SICARIO, though it wasn't exactly filmed in Juarez, does manage to put the fear of God in audiences' heart by showing Juarez for what it is, there's no sugar coating, there's no hiding that it's one of the murder capitals of the world. It's a deeply harrowing part that will stay with you long after you've done watching the film which in and of itself wrestles with questions of morality.SICARIO means 'hit-man,' you'll come to wonder which of those three lead characters is the actual hit-man but ultimately, what SICARIO gives you is this dilemma,... if somebody could finally solve the drug cartel and drug kingpin problems for the rest of us, would you really care that they did it by killing instead of bringing the perp to justice?

Jesus.This was intense. So much so that it made me kind of uncomfortable. I was squirming in my seat. And it was extremely dark. Not color wise, but the subject matter. Villeneuve really knows how to take the most vile subjects and turn them into wholly compelling cinema.The cast was uniformly excellent. The big three of Blunt, Brolin & Del Toro are all crazy good. Even though Blunt has the lead role it's definitely not a showy part...it's very understated with a lot of it consisting of looks. An internal performance, for sure, but one that might just be the best of her career. Brolin is given a role that at first seems like nothing more than comic relief, but as the film goes on he keeps becoming more and more a part of the character until close to the end when all the jokes disappear and he becomes something else entirely. It was really cool to see that transition. Very good work from him and there are times where it feels like he's stealing the whole movie away from the others. Which brings me to Mr. Del Toro. What else is there to say except Ho Lee Sh!t. This man was just on a completely different level with this performance. Another one that begins very internal consisting of a lot of looks mixed with one or two word responses...then gradually as the film progresses and his background and motives become clearer he, like Brolin, becomes something else entirely. But at the same time never going overboard with it...still keeping that quiet intensity he's had throughout. All three performances are absolutely fantastic and among the best of the year. Hell, Del Toro's might even be the best of the year. Haunting stuff.As mentioned above this a very intense film. The set-pieces in this are unbelievable. The opening raid, The Border crossing, The night- vision/tunnel sequence and finally The dinner scene. Just pure craziness.With that being said - I don't think this is an Oscar movie. It's just way too dark for the Academy's liking. Very much like Villeneuve's Prisoners, both films are more than deserving of awards attention, but unfortunately the Academy rarely goes for films this dark.See this movie ASAP. Preferably in a theater. Just know you might need a shower afterward.

Get ready for the chills...

It is so bloody... but I couldn`t stop watching it... The cast is amazing and the soundtrack wow! Thanks YTS!

again the trailer caught me in.

Great Torrent! As always. The movie was amazing, a lot of detail in the plot, the actors played there roles perfectly! 9/10